Please select what type of customer you are:

Halal Healthy®: In the Media 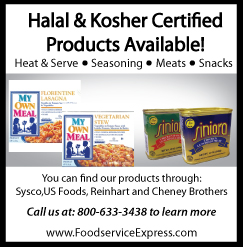 Is your foodservice business halal-ready?

Looking to expand to the Halal market? Read this informative article published in the Foodservice and Hospitality Magazine. With information on how to prepare a menu, kitchen requirements and more…

Everything you wanted to know about halal food but were afraid to ask...

Impossible Foods received its halal certification from the Islamic Food and Nutrition Council of America (IFANCA.) The company’s flagship product, the Impossible Burger, top photo, is now halal certified by IFANCA under the Jabatan Kemajuan Islam Malaysia (JAKIM) regulations.
“Securing halal certification is a significant milestone for us,” said David Lee, Chief Operating Officer and Chief Financial Officer of Impossible Foods. “Our goal is to make plant-based meat available to everyone around the world—including to those who have religious dietary restrictions. We’re thrilled that the Impossible Burger can now be served in halal establishments.”
Earlier this year, Impossible Foods was certified kosher by the Union of Orthodox Jewish Congregations of America (the “Orthodox Union” or OU). In November, Impossible Foods received the highly regarded Safe Quality Food (SQF) certification as administered by the Safe Quality Food Institute (SQFI).
Prior to receiving the certification, a halal auditor visited Impossible Foods’ 68,000-square-foot manufacturing plant in Oakland, Calif. The auditor inspected the facilities, reviewed ingredients, and observed the complete production process, before confirming that the ingredients and the plant’s practices are halal-compliant and adhere to Islamic dietary laws, as defined in the Koran.
The Impossible Burger is now available in about 5,000 locations in the United States, Hong Kong and Macau — up from about 50 restaurants one year ago. The company has announced plans to launch in Singapore in 2019, with additional markets to come. Read more...

University Dining has taken steps to improve food options to accommodate those with special dietary needs. New red-handle pans and spatulas, as well as a new nutrition icon, have been added to mark dishes that have touched or made with pork for students who maintain a halal diet. Additionally, Dining has implemented Menus of Change principles that tie health and sustainability together. Read more...

The new station will take the place of Hewitt’s “action station” and will exclusively serve certified halal food. In Islam, halal foods are those that are free from any component that Muslims are prohibited from consuming—such as pork and alcohol—as well as those produced or stored using utensils, equipment, or machinery that have not been cleansed according to Islamic law. Read more...

Your shopping cart is currently empty.